This Lent, Abingdon Press has published my book, Thank God It’s Thursday: Encountering Jesus at the Table.  The book is a sort of companion to my Thank God It’s Friday, which received a gratifying reception from the church. 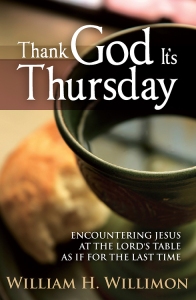 His hour had come to depart from this world and go to the Father.

We awaited this hour throughout the Gospel of John.  Some of us thought that his hour would be an hour of grandeur, an high moment when Jesus would at last throw off  his humble humanity and begin to act like a the Messiah we wanted him to be.  But no, his hour will not be a triumphal march into Jerusalem, when he seizes power, takes over the government, and kicks out the Romans.  His hour will be spent with friends around the dinner table, patiently giving us the core of his teaching.

John says that Jesus’ “last supper” was on the eve of the celebration of Passover, Israel’s Fourth of July, hour of Independence from slavery.  Jews are those who know by heart the great prayer, “Hear on Israel, the Lord your God is” (the one and only) “God.” (Deut. 6:4)  God’s people are not free to bow before other lords and lordlets, even one so ruthlessly presumptive as Caesar.  How bitterly ironic that on Passover, Israel’s grand day of independence from slavery, some of God’s cherished people collaborate with pagan Caesar to put to death God’s Son.  When all Jerusalem celebrates the actual feast, Jesus will be lying in the tomb (19:38-42) and Caesar’s gods will think they are victorious.

Jesus had spoken rather ominously of “my hour” (2:24; 7:30; 8:20).  “My hour” is a decisive moment.  Here at the table we are told that at last his hour has come.  Luke speaks of Jesus’ death as an exodus (Luke 9:31), clearly evoking Passover and deliverance.  John calls his hour a departure (metabaino, a “cross over,” John 13:1).  In John, Jesus is crossing from this world to another, making a crossing before us, returning to where he had come before Incarnation (1:1-5, 14).  When someone dies, we say that they have “passed away.”  Jesus is passing over.  Thus John gives heightened meaning to “Passover.” Jesus is passing over not just from slavery to freedom but also from death to life, passing over from this world to another.

And yet, here at table with his friends, in celebrating a meal, the most social and communal of human acts, Jesus shows that he has no intention of crossing over alone; he will, in some sense, take us with him.  As he lifts the cup and passes the bread, he is leading us to a place we would not have, could not have gone without his taking us there.