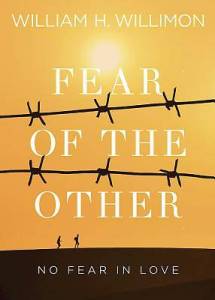 Please click on this link for more info, and to order

The Test of the Church

Competing attempts among politicians to leverage our fear of others into votes for them led to the idea of a book that thinks as Christians about the Other. Let the politicians do what they must to be elected by people like us, though I think they are selling us short. My job is not to worry about opinion polls, or what nine out of ten Americans can swallow without choking. My peculiar vocation is to help the church think like Christians so that we might be given the grace to act like Jesus.

A few miles from where I live, three Muslims graduate students–Deah Shaddy Barakat, Yusor Mohammad Abu-Salha, and Razan Mohammad Abu-Salha–were executed by a gunman who looks a lot like me. I am bold to believe that Jesus gives usthe means to condemn, repent of, and defeat such crimes.

I confess that I have rarely been the Other. Born to relative privilege, anything I lacked at birth I made up for by youthful manipulation of American higher education and the church to my advantage, encouraged and welcomed by others all along the way. Almost nobody regarded me as a potentially threatening Other.

In conversation with a ministerial colleague, he casually recalled being a sophomore at Methodist, Milsaps College. He had finally summoned the courage to ask a young woman to go with him on a date to a restaurant in town.

“Order anything you want,” he told her as she examined the menu.

“It all looks so good, it’s hard to decide,” she said cheerfully.

They chatted about school, about this and that. And chatted.

When a waitperson finally brushed by their booth, he said, “Excuse me. No one has taken our order.”

“Take a hint,” she snarled and bustled away toward another table.

He sighed and shut the menu saying, “I’m not really all that hungry after all.” And they left.

Did I mention that my colleague is African American?

Listening to his story I thought, nothing like this has ever happened to me. I can count on the fingers of one hand the rare moments when someone has reacted negatively to me or judged me unfairly because of my race, religion, gender, accent, parents, or appearance.   I have treated another person not in the way of Jesus, as my neighbor, but as the fearful, threatening Other. Though I have sometimes tried to excuse my sin as “just the way I was brought up,” or due to my psychological insecurities, my behavior was in clear rebellion   against the expectations of Christ.

I have treated another person not in the way of Jesus, as my neighbor, but as the fearful, threatening Other. Though I have sometimes tried to excuse my sin as “just the way I was brought up,” or due to my psychological insecurities, my behavior was in clear rebellion   against the expectations of Christ.

Yet I also write as one who, solely by the grace of God, is being redeemed of my own sinful inclination to Xenophobia. I have personally experienced the joy of receiving another not as enemy but as potential friend and the grace of being received warmly by the Other.

As Bishop I saw churches transformed in their obedience to Christ’s command to welcome the stranger and in baptism, to name the stranger as family. More than one congregation, in showing hospitality to the Other, has had Jesus slip in their once closed door.

Tom Long repeatedly relates the story about the Sunday, in his boyhood Presbyterian church in Georgia, a man in shabby clothes ambled into their church during the service. Perhaps he was a drifter passing through, or maybe he had jumped off a boxcar on the nearby tracks, up to no good, planning to prey on people while their guard was down at church.

All they knew for sure was that he wasn’t one of them.

The ushers stepped aside as the stranger entered. He was handed a worship bulletin, but not graciously. He sat by himself on a pew toward the rear. Throughout the service, pasto and worshippers cast nervous glances in his direction, wondering how he might disrupt their worship. When the offering plates were passed, folks suspected that the stranger might take something out of the plate, rather than put something in. After listening to the sermon, the man arose and quietly departed.

Though Tom was a child at the time, he recalled that after service the Georgia farmers  stood under the big oak in the churchyard, talking in serious, muted tones.

“They probably didn’t know how to say it,” says Tom, “but everyone knew that God had  put our church to a test. And we had flunked.”

Tom so frequently retells this story because he knows that it is at the heart of what it  means to be best friends of Christ and at the same time, his most disappointing betrayers.

In presenting our church with sisters and brothers whom we fear as the Other, God is not only testing us but giving us a gracious opportunity to recover the adventure of discipleship. By the grace of God and the ministrations of the church, we are enabled to have better lives than if Christ had left us to our own devices.

One thought on “Fear of the Other: No Fear in Love, part 1”